I think there’s too much time I did not talked about ULPNode project, good news, it’s now time to talk about it and it’s timeline.

And it’s difficult to find a good starting point since all that I will describe is really linked.

Well looking at this seems complex, and it is, but if you just want to use it, all is already done and you just need to upload sample example code and you’re in, but I need to organize the way I will describe all of this. Let’s start!

You will find below the boards I used to write all code going around this project. These board are named V1.2 but even if they are close to final design it will not the be the case. I will describe why below, but for now, it’s time to picture prototype boards 😉 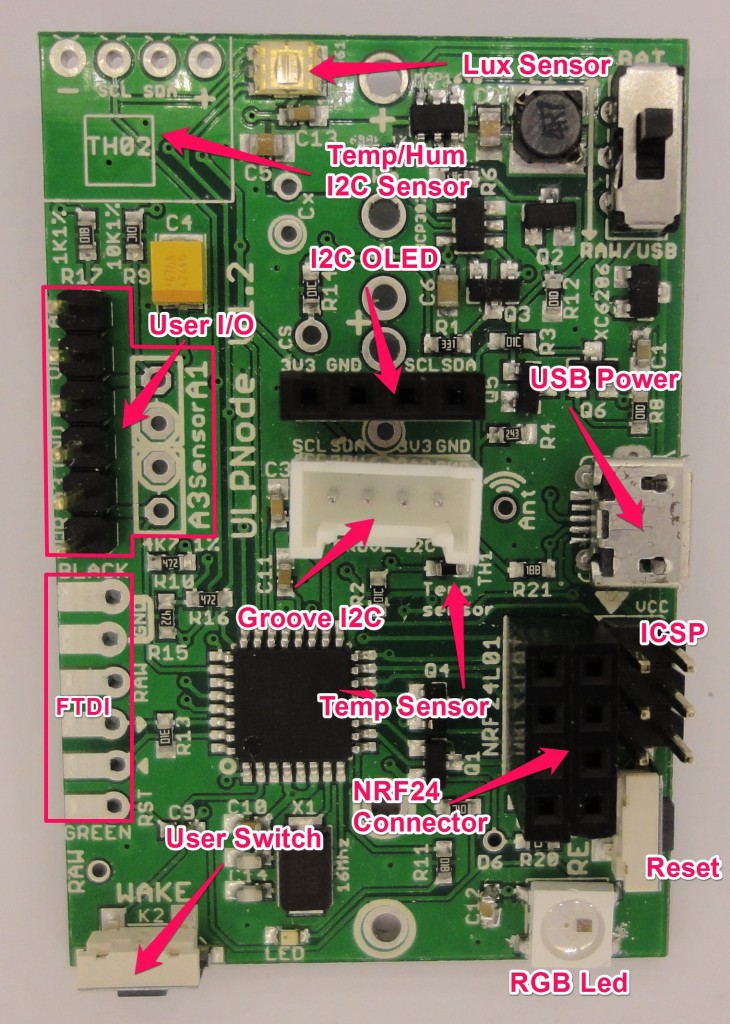 The board will include: 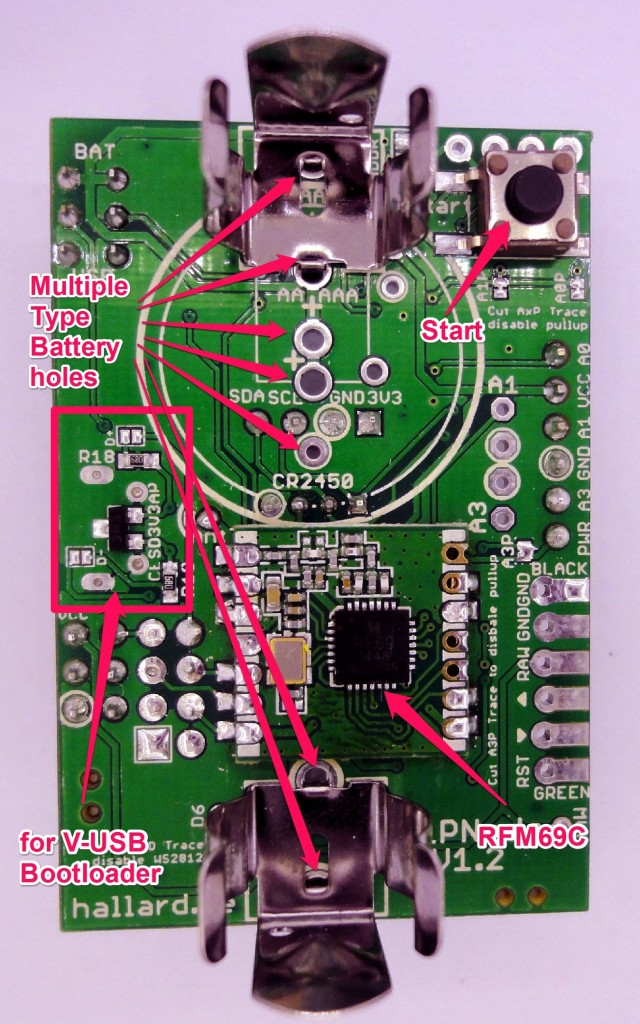 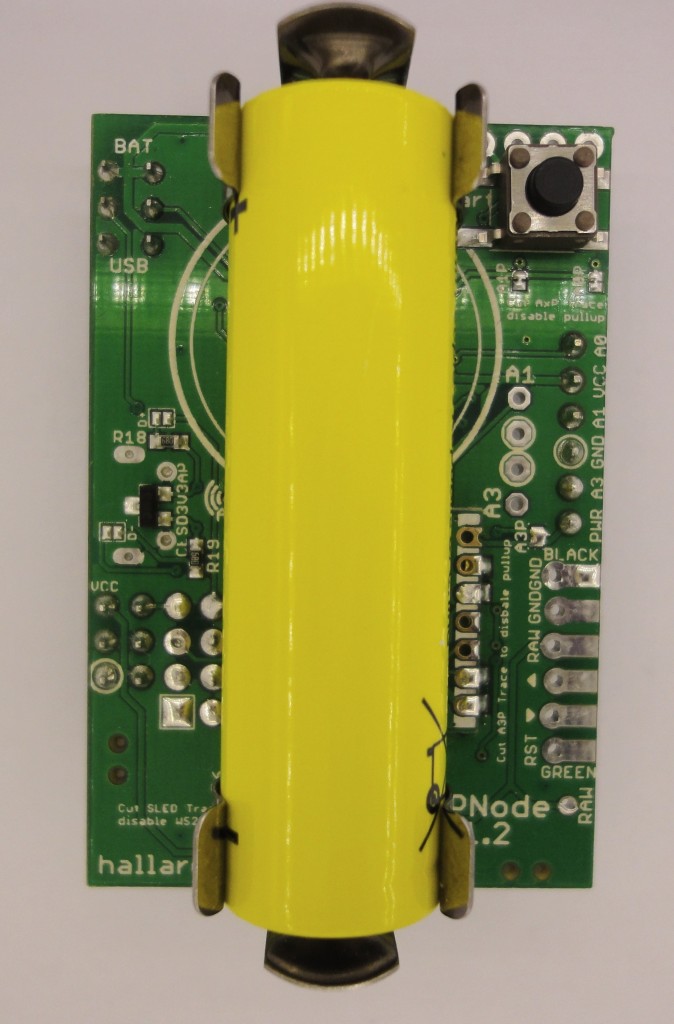 Why a change in the design ?

I discovered that the optional Temperature/Humidy sensor I made available to put on ULPNode board (top left), named TH02 does not work if there are any other I2C devices talking on the same I2C bus. Whoo, they claim I2C devices but it’s not the case.

For this reason I needed to switch to another device. I use the well known SI7021 so I will made PCB footprint for those who want’s to have it on next revision of ULPNode board. And thanks to my onboard I2C grove connector, I was able to test it without redesigning ULPNode board but just to use a custom grove I2C SI7021 Temperature Humidity board 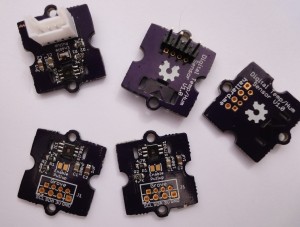 Second reason is for hardware change, I need to arrange some components placement.

This one is the last but not the least, I think I will totally change the board format to fit into a enclosure. I’m not sure for now this final decision. But finding a good enclosure is not so simple. I used the following one for other project and I already have eagle footprint so it’s just a matter of routing job on ULPnode board. 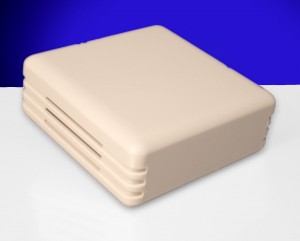 See more info on this one on manufacturer site.

By the way, even with board with enclosure size, you could leave as is also (ie no enclosure). So I need your help, I’m opening a vote on the community forum to determine how future ULPNode board will be.

You just need to follow the procedure in this post, if you already have an account with social authentication on the community forum, it will take less than 15 seconds.

Playing now for months with some ULPNode testing board hardware revision V1.2 described above, I’ve been working last month intensively on testings and library coding.

The ULPNode code stuff is divided into 3 parts as follow :

ULPNode RF protocol is the common code to link between Gateway and Node, mainly payload definition and protocol frame decoding. full description is already available on this dedicated blog post and sources code are already released on github.

The library for ULPNode Arduino boards, I tried several ideas but my main concern when coding ULPNode Library was

Code for any universal Gateway, for example Particle hardware but it could be ESP8266, Pi, Arduino, or even a ULPNode device itself.

The main concern about the gateway is the sketch size, on Arduino, with RF module Serial configuration, Debug, JSON output and OLED display I’m reaching the end of the flash size and adding new features such as DHCP management or OTA config will be very difficult (except removing OLED), and connecting Gateway to Internet require another device (Raspberry, NAS, computer, ..)

So a new simple target with plenty of RAM/Flash and WiFi connection such ESP8266 or Particle can also be great and remove the need of a Internet connected device.

Protocol between Gateway and world

The Gateway protocol for now is just returning JSON string over serial, and I push them to emoncms for testing using node red on a raspberry PI (see below) 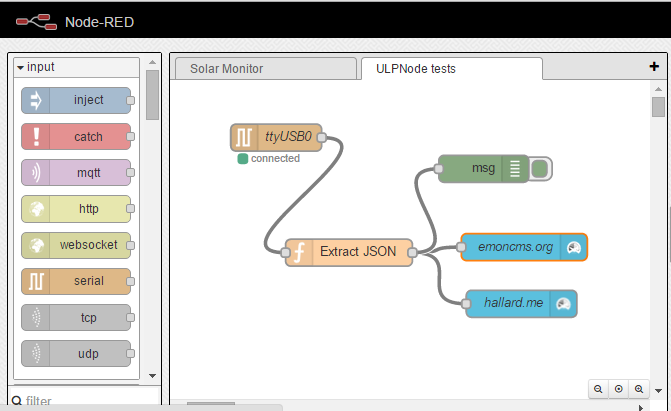 Bonus : 2 gateways pictures running, the 1st one with a Moteino and 1.3″ OLED display 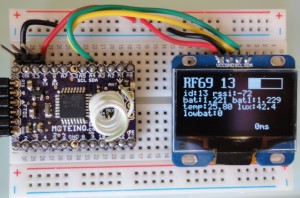 The next one is more funny. It’s an ULPNode itself, powered by a single AA battery, not sure how long it can go on this since gateway has no code for Low Power, but it should be possible to sleep gateway and wake it up on message reception. 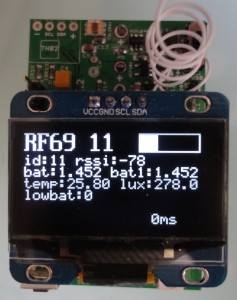 ULPNode Gateway With another ULPNode powered by a single AA battery

Hey, I’m thinking, it should be possible to do a simple battery checker with display with this board just by changing code. Just to clip the battery to test, and if it work, display battery voltage, if not the battery is really down because the one I used for this example picture was around 1.1V, so really low and it worked, amazing !!!!

ULPNode library and Gateway code will be released in the next few days, links on this page and ULPNode community dedicated section will be updated according to. If you’re interested, I strongly recommend to follow (watch button once logged) the dedicated section on community forum to be notified on each new article.

Then I will do some change on PCB according the PCB version choice you prefer (you’re encouraged to vote here) and let them going to manufacture.