This post present the protocol specification between Raspberry Pi and Arduino of the ArduiPi board.

The protocol will be the same and independant of the communication channel used. If you are on this page, this means that you probably already know the goal of the ArduiPi project. If not please refer on the post that present this project on this blog.

The communication could be done by three ways

At this step, you need to know that Arduino pins that you can see on the arduino board are mapped to physical Arduino ports that may not have the same name into the Arduino chip. Here below the port mapping definition : 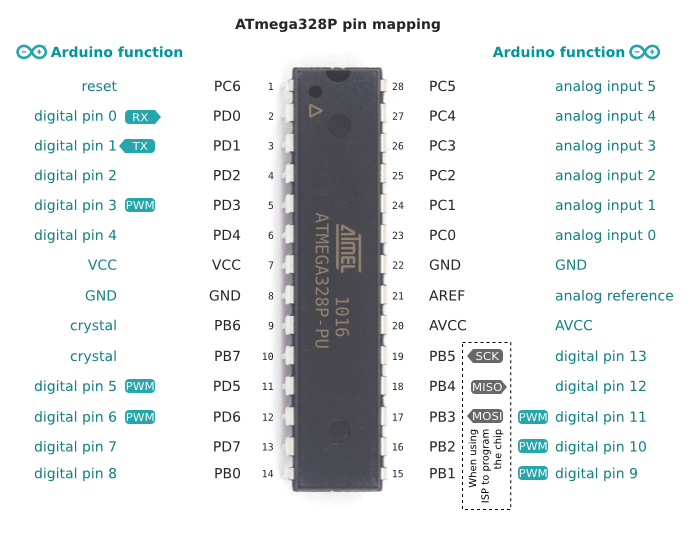 The communication is done by sending one or more byte to Arduino, then Arduino can immediatly do the action such of controlling a port and if needed return data such as analog value for example.

Somme overhead could be added depending on protocol used. For example to communicate with i2c we need to add before the device address (which is part of the i2c protocol)

On ArduiPi the arduino i2c slave address is defined to 0x2a and it is connected to i2c bus 0 of the Raspberry Pi or i2c bus 1 for the Raspberry Pi Revision 2. So we can issue the linux i2c command i2cset and i2cget to set or get information.

Each i2cset or i2cget commmand should begin with the following parameters :
-y 0 0x2a
-y to avoid prompt from the command line tool i2cset ot i2cget
0 refers to i2c bus 0 (so 1 for Raspberry Revision 2)
0x2a refers to i2c slave address (here the arduino)

If i2cget or i2cset command use a word instead of a byte for the last parameter, the command should end by w to indicate the value is a word value.

To simplify the project, I’m writing a program to replace i2cget and i2cset command that could also be used to communicate with spi. The program is called ardupi and this is the preliminary command line syntax

You can communicate with i2c communication with classic i2c program and/or arduipi program. The sample that are in the following table can be run on Raspberry Pi Revision 2. If you are using Revision 1 change all i2cget and i2cset command -y 1 to -y 0 (Revision 1 use i2c bus 0, not 1). arduipi program autodetect revision and adjust correct i2c bus if not specified.

The command will always refers to the port where we want to make action. You have the possibily to talk to the Arduino using either the AVR name or Arduino name depending on what is your preference.

The following present the command list used by ArduiPi

Note that theese functions will have side effects on anything else that uses timers:

Thanks to macegr of the Arduino forums for his documentation of the PWM frequency divisors. His post can be viewed here