Playing around with Hoperf RFM12B and RFM69 for my wireless sensors, I discovered they also have one interesting sensor for temperature and humidity called TH02. Just look the picture below, this sensor is so small 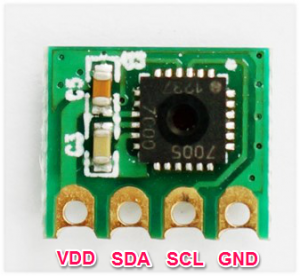 Of course I already looked and tried some other humidity sensors such as DHT11 or DHT22 but from my point of view they are too big and not so accurate, slow conversion time and does not have really low power. Moreover, protocol to read them need to be interrupt free and strict timing for controlling the pins.

I found some other more accurate but far more expensive. Well the famous “you’ll have what you pay for” applied for humidity sensors until I discovered this one.

TH02 is an I2C sensor, as I’m using a lot of I2C devices such as OLED described in previous post it’s not really a problem. And what I like on this sensor is :

And for all of this, I think it is an excellent humidity and temperature sensor. This is why I ordered some and played with them without any problem.

While I was testing them with my sensors, I created a Arduino library to use it. You can find the library and sample code on my github in the TH02 repository

Usage and installation are described on README.md file. . Edit of April 2015, The library now use the Arduino Wire library. This add compatibility with other I2C libraries already using the wire library.

Here is a dump of the sample sketch GetTempHum provided with my library running :

See this sketch source code on Github TH02 library. The test has been done cabling the sensor to custom Moteino USB board like the following picture 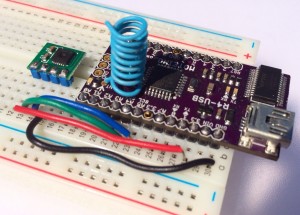 For any explanation see TH02 sensor information and datasheet on Hoperf site. This is the documentation I used to create the library.

You can buy sensor on Anarduino site for $4.55