Why this new project ?

For some time being, I researching a way to have to have a kind of “universal” Arduino node sensor. When I say universal, I’m talking about connecting to it several sensors type (Temperature, Humidity, Lux, … such as LDR, NTC, PTC, DHT11, DHT22, DS18B20, I2C sensors). I found a lot on the net, some very interesting and fine products such as Moteino, Anarduino miniwireless, Jeenode, but as today, none are especially made for ultra low power with long battery life when using classic battery such as one AAA, CR2450 or CR2032 Cell Coin. So not using Lipo, or any rechargeable batteries.

At 1st research I tried lot of them, it works fine, but as soon as you want to power them with classic battery (one AAA, CR2032, …) you’re facing other challenges, be able to maximize the battery life and also be able to send wireless frames until battery is reaching it’s end of life.

I’ve also tested several RF modules such as RFM12B, RFM69, NRF24L01 and results are the same, this is logical since the power consumption reach the max when these modules are sending data over the air.

Of course the battery life depends on accurate and optimized code for sleeping mode but during my prototyping I also saw that the conception of certain type of battery can cause node stopping sending data even if the battery has enough power (voltage). This is due to the internal resistor (IR) specially on cell coin battery (see this post for detailed information). When sending data, you may need to have peak current that will create a drop voltage on the internal resistor, this voltage drop can be large enough to stop wireless module to send frame. For example, imagine a CR2032, with 20 Ohm internal resistor. Let’s say that battery is running for some time and it’s voltage it’s about 2.6V, this mean the battery if far away from it’s end of life. When the node activate the wireless module to send data (example RFM12B) the consumption can reach 25 mA, this mean that 25 mA across 20 Ohms IR drop 0.5V, this drive your powered node driven by 2.6V – 0.5V = 2.1V which is under the RFM12B minimal voltage (Datasheet says 2.2V) and thus, this does not work anymore (in fact your node is working, but is unable to transmit frame to a gateway).

How to achieve the challenges ?

This is why decided to try to create a wireles node that remove all these limitation and that works very long time, until battery really reach it’s end of life. The challenge was strong enough but I can say now that it has been reached. I’ve been working and testing different prototype and technique until I found “the one”. I do not know if it’s the best, but this new one works fine. For this I also needed to change lot of things over “basic” Arduino wireless node. What I’ve done is detailed on the following steps :

I’m currently working on the 4st prototype generation and near to the mass production. Since it’s really a new product on the market (I did not found any one existing but if you know one, I will be interested to see), I hope it will wake up some kind on interests on the community. Of course if it can do a lot, it can do less, so ULPNode has also been designed to work in always powered mode (using it as a Gateway for example) or in always receiving Node mode (to be able to remote control things when receiving specific commands).

All the project will be open source, hardware and software, I will release the schematics and the code as soon as I will have the first batch of node produced.

The product will we called ULPNode, for Ultra Low Power Arduino Node and here are the features currently working on ULPNode :

Now just to keep your interest, I want to let you know that my currently working nodes under testing with one old AAA battery are sending sensor frame (temperature and luminosity) approx every 30 seconds to my gateway. And the consumption on the AAA battery is about 0.4µA, Yes this is 400nA. Trust me, I though my uCurrent device was not working at 1st time !!!.

Edit : October 10th : The following measures were done with quite old AAA battery (1V), I tested with fresh cell coin and the idle consumption is more approx 900nA in this case (this is still excellent by the way) And this totally makes sense, since voltage is 3 times higher. And this confirm my first powering choice, with cell coin, battery life is excellent but with AAA it’s even better and the preferred choice for powering the node. End Of Edit

What does this means ? Quite simple, let’s assume that reading the sensors and then sending the result frame data over the air is taking 100ms (and with Analog sensor such NTC/LDR it’s really, really slower than that, but I’m taking a “bad” case in term of time).
So : 100ms usage every 30 seconds, this mean that ULPNode is consuming on the battery only 400nA but also this consumption is occurring for 99.6% of the time, the other 0.4% consumption occurs when reading sensors and sending data.

This is pretty fine, but let’s try to calculate our battery life in different case with RFM12B and RFM69 modules. This calculation is just an approximation but will give us one idea. Only testing under real condition will give us real answers.
Assuming we transmit wireless data at speed of default libraries and we’re sending 18 bytes (3 bytes of preamble,  2 bytes Sync, 2 bytes headers, 2 bytes of CRC (see Felix’s RFM69 frame description) and says 9 bytes of payload (1 for payload type + 4 sensors of 2 bytes). This make a total of 18*8 bits resumed on the following table in term of duration of the transmit time :

As you can see, I overloaded the values to be sure and to compensate consumption of reading sensor (passives ones) for digital ones it can be more but really depends on sensor type and datasheet. I’ve also increased the duration of wake up to 10ms instead of 3ms. I think these values are safe for a basic calculation. The following table presents the calculation results :

Wowww, Wowww, Wowww, I’m not really sure this calculator is accurate but the results are just amazing. If it is realistic, I will not be anymore alive to see some of the results.

What’s interesting, is that with a CR2450 with RFM69 Node sending every 30 seconds (at full power), the life duration would be over 3 years, this making these node really, really, Ultra Low Power as my wish ;-). But once again only real tests will give the answer. I’m seriously in doubt about these results.

Ok, if you’re still reading, this means that you’re surely pointing on some interest on this post, so let’s get started with some description on how to reach this.

I decided to write some articles and give you more detailed information. The following articles will be written on the fly and be released as soon as I will go trough the production. They will show you step by step the advanced techniques used to achieve this project. I hope they will be interesting and let you having some fun reading them and more, using them in your own projects

Every Article will give you some clues and indications on how all of this kind of magic has been achieved, I strongly suggest the 1st reading on the bootloader that will come in few days, you will see code control and optimization and some advanced technique to share bootloader code and Sketch code. In all this project I will refer to the bootloader code as “Kernel” code to drive low level core function of driving the ULPNode hardware.

And here are a picture of different early prototypes 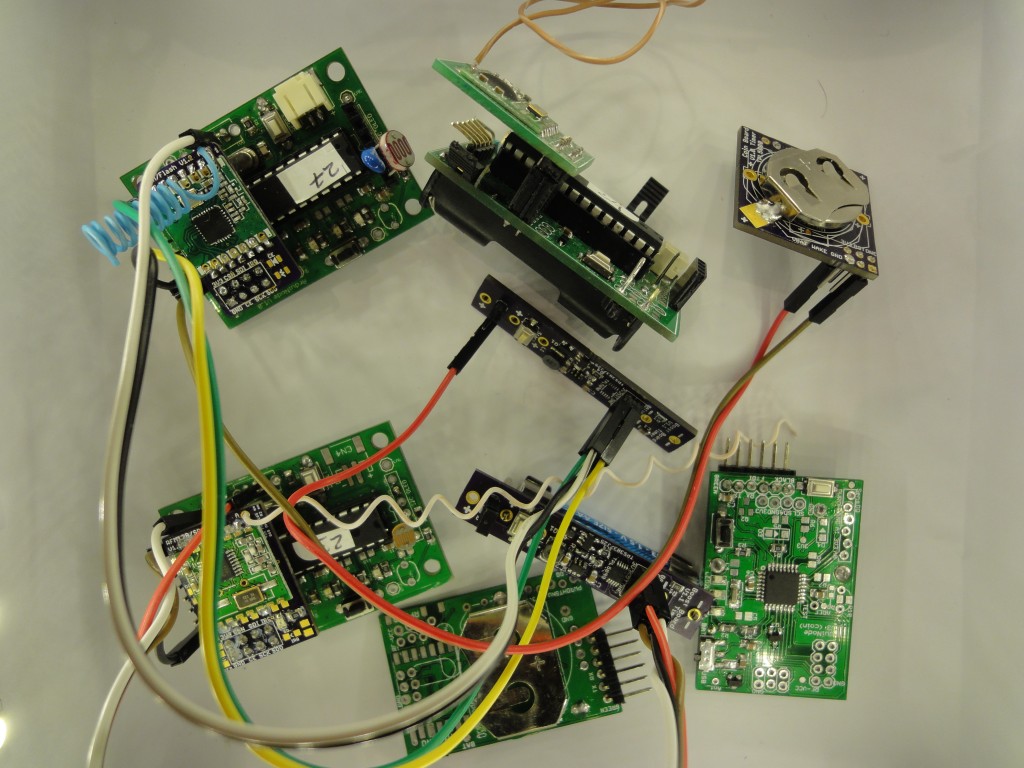 I apologize for the time needed, but please be patient, writing is really time consuming and between, test, conception, headaches, hardware problems, software debugging, and my main full time job, remaining time is really really limited…