Today I wanted to do a quick project status of the 1st prototype of ULPNode I received some days ago. After the introduction of ULPNode, and both articles about  bootloader (1 and 2) used, for this one I will start with pictures of the prototypes. 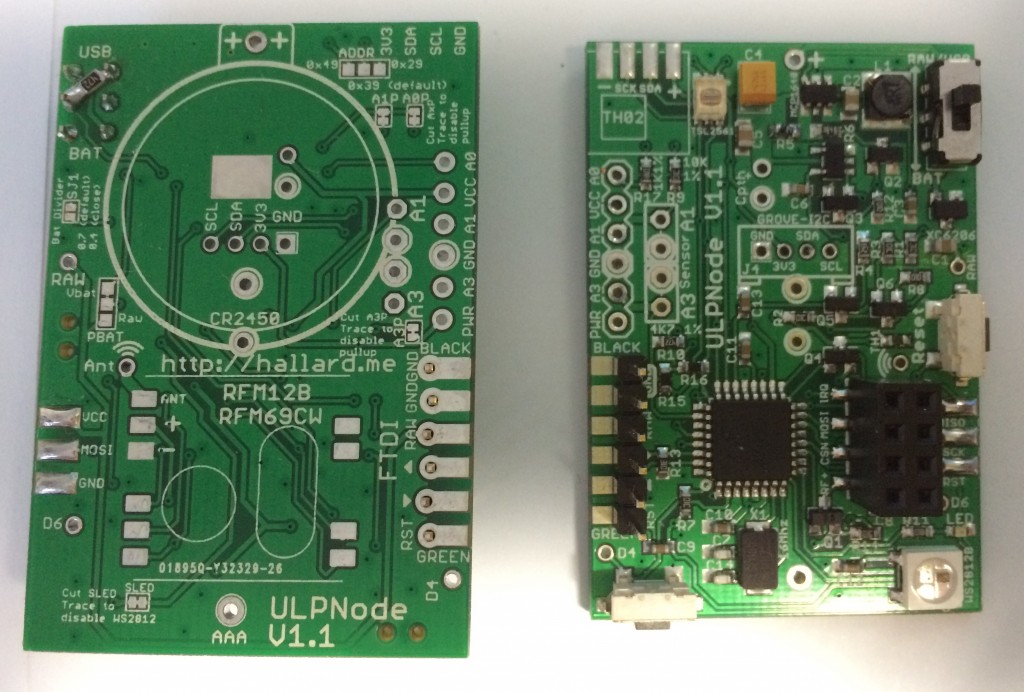 What’s on the board ?

The board contains several parts, I will not enter into deep details now but let’s see the main features.

RGB Led was working on some boards and not others, after digging into scope it shows that at 4MHz the timing to drive it are not respected, on more tolerant chip, it works, but not on the others. That is why I decided to change speed to 8MHz to drive the WS2812B. In real working condition of ULPNode, this speed will be setup only before driving the RGB and set back to 4MHz after. Remember 4MHz is the cruising speed ULPNode because it can works until 1.8V. I changed the bootloader and sketch according to this, now it’s working very nice.

Battery measurement was not working as expected, after investigation, it was a stupid mistake of reversed source and drain pin of a Mosfet in Eagle CAD. Corrected now on schematics and PCB

Edit : 01/07/2015 : After correcting the reversed MOSFET described above and done some code optimization, the idle consumption went incredibly lower.

Now just as an example with AAA battery. Assuming I want to do nothing (no measure, no transmission, ..) just node to be alive and blinking RGB LED, I’m able to have the ULPNode intelligence part (ATMega328, RFM69, TSL2561, …) consuming absolutely nothing on the battery for about 108 seconds (hardware sleep mode default duration) then consumption goes to approx 15 mA only for 10 ms (let’s says we blink 10 ms) , and then back to 108 seconds off again. From an CR2032 battery, the sleep duration is a bit lower (90 seconds) which confirm my first assumption, best results are achieved with AAA battery. During this sleeping stage only power management circuit quiescent current is pumped from battery (approx 400nA). Not Bad at all !!!

More than this, if you decide to have a pulse (rising/falling) sensor (counter for example), the consumption will be able to be 400 nA until falling/rising edge wake it up (even if pulse come once a day !!!!!).

Now if for example we want to do sensor measurement and transmit frame every 108 seconds, the consumption will be 400 nA during  108 seconds, and about 10 mA for 30 ms (sensor measurement) + 45 mA (depending on transmitter) for 5 ms to send frame. This is more than 99.9% idle time consuming 400 nA

I let you imagine the endless possibilities you can achieve with this new feature. I will do more measurements soon, but I wanted you to know 1st results.

I’m now doing more intensive testing before ordering 2nd prototype, I will let you inform of the project status.

Here below a bonus picture of ULPNode powered by AAA battery. Stay tuned. 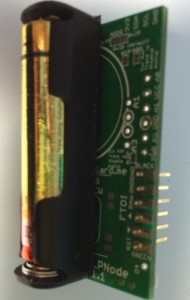 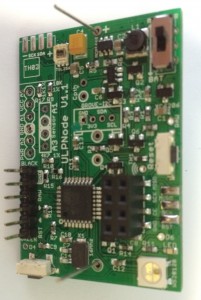