ULPNode RF Radio protocol was intended first time to be part of ULPNode library, but as soon as I tried to compile gateway code for other target as ESP8266/Particle/PI and others, some targets env compile all source folder file and as ULPNode library is intended for ATMega328 this was generating errors unless I start playing with #define everywhere.

I Also found not relevant that any gateway need the whole ULPNode library which is dedicated to node compilation only. That is why I decided to outsource RF Protocol to be able to compile easily on any target. I do not know if it’s the best way, but I find it very simple and working.

The RF protocol is based on the excellent software stack RadioHead developed my Mike. Not only very well coded, it works fine and there are a lot of Hardware modules we can use with it such as RFM69 (my favorite one) or NRF24L01 .

The RF protocol definition is quite simple and dynamic, these mean that a Node (identified by a Node ID) can send any number of sensors data in the frame to a gateway (identified by a gateway ID). We could extend also the Network ID to separate different networks but for now it’s fixed by ULPNode RadioHead driver library.

A packet is just a suit of data bytes organized. I will not describe the low level (preamble, sync bytes, header, CRC) because it depends on hardware module used and it’s managed by RadioHead library. But as examples here how it works for RFM69 and NRF24L01

And finally here is the protocol definition

When a Node is sending data to the gateway, it set the type of transmission needed (this internally set headers flags), what can be done with ULPNode are :

One point to note is that you need to instance the RadioHead and tell it what kind of transmission you want to use, reliable or not reliable. This means that a non reliable node can’t talk to reliable node and this versa. And I do not wanted this, I needed a node to be able to talk reliable (sensitive and critical data) AND not reliable (basic, not so much important data) to the same Gateway. This is why I used basic driver and datagram transmission of RadioHead and implemented Reliable a higher level and standard version in ULPNode library (mainly inspired from reliable datagram of RadioHead). So ULPNode can do both, great !

The two sending methods are provided by ULPNode library you don’t need to manage this. You just need to select the one you want to use when you send a packet. ULPNode will take care of retries and will just tell you if it succeed.

ULPNode can build mainly (for now) 2 types of payloads, a command action, or  sensor data as follow. the type is determined by the 1st payload byte and it can be a command code or succession of sensor data small structures code.

The payload control code indicate what we’re sending/receiving, the values definition are following

Ping packet is a small packet to verify Gateway communications, we send node status flags and node battery voltage in mV, we set RSSI to 0 it will be filled in Gateway response

Ping Back packet is the response to ping packed and issued by the Gateway as a response to node. Same data structure are returned, Status and Battery level are set to 0 and RSSI is filled. The RSSI contains at which RSSI level the Geteway received the Ping packet. Could be used to determine auto RF TX power level to use. Decrease if node near Gateway (High RSSI), Increase if it’s far (low RSSI).

Preliminary : need to be implemented, we should be able to Send Node configuration from Gateway Web interface

Preliminary : need to be implemented, we should be able to do Firmware update from Gateway Web interface

DHCP Request can be asked by the Node to request a Free Node ID to the Gateway. Unconfigured node will have a defined and fixed Node ID. Node ID should be 0 on request, and will be filled in Offer response. Net ID is not yet used.

DHCP Offer is send the node ID attributed by the gateway if there one free, else 0. Net ID is not yet used.

Payload Sensor Data (1st byte of payload and so on)

When I started to code protocol I began with payload definition for each type of full frame sent and I quickly managed too much frame type because you can add so much and different sensors on ULPNode that it became a nightmare to manage. I needed smart things.

That was time of dynamic payloads, we’ll need to send as much data as we want without managing fixed frame payloads. The idea was to create small structures for each sensor type (temps, battery, lux, …) and then add the one we need to the payload, in whatever order we want. We just need to indicate what type of data it is, we can add new without touching existing sensors, fine !

To achieve this here are the structure defined for data, each structure contains at least one byte to identify data and one ore more depending on data type. Then these structures are put in the payload one following other, and the Gateway will recognize data type and will be able to decode them. Each structure can have up to 4 values in case of multiple sensors of same type

I know this is a lot of information and and 1st reading it could seem complicated, but to be make things simple I’ve put some payloads examples relative to what I’ve just talked about.

Sensor Data sent by ULPNode example sketch  Wake_Transmit_Sensor.ino, as you can see, user payload is a succession of sensor structure data, we can add 1 or remove one, no problem.

This one is sent by ULPNode example sketch  Wake_Transmit_Sensor_si7021.ino, as you can see, SI7021 data sensor has been added to the previous example (click to zoom). The first s_temp (on board NTC sensor) has code 0x24 and the optionnal 2nd one from SI7021 I2C sensor has code 0x25

Or if you have enabled a display on the Gateway, you can see something like that 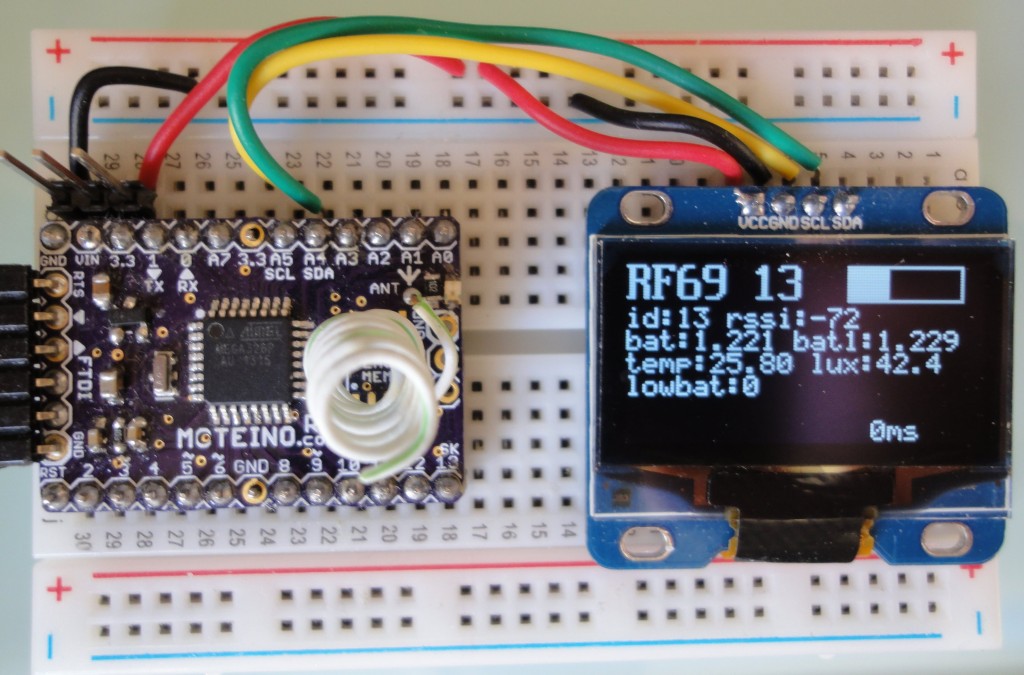 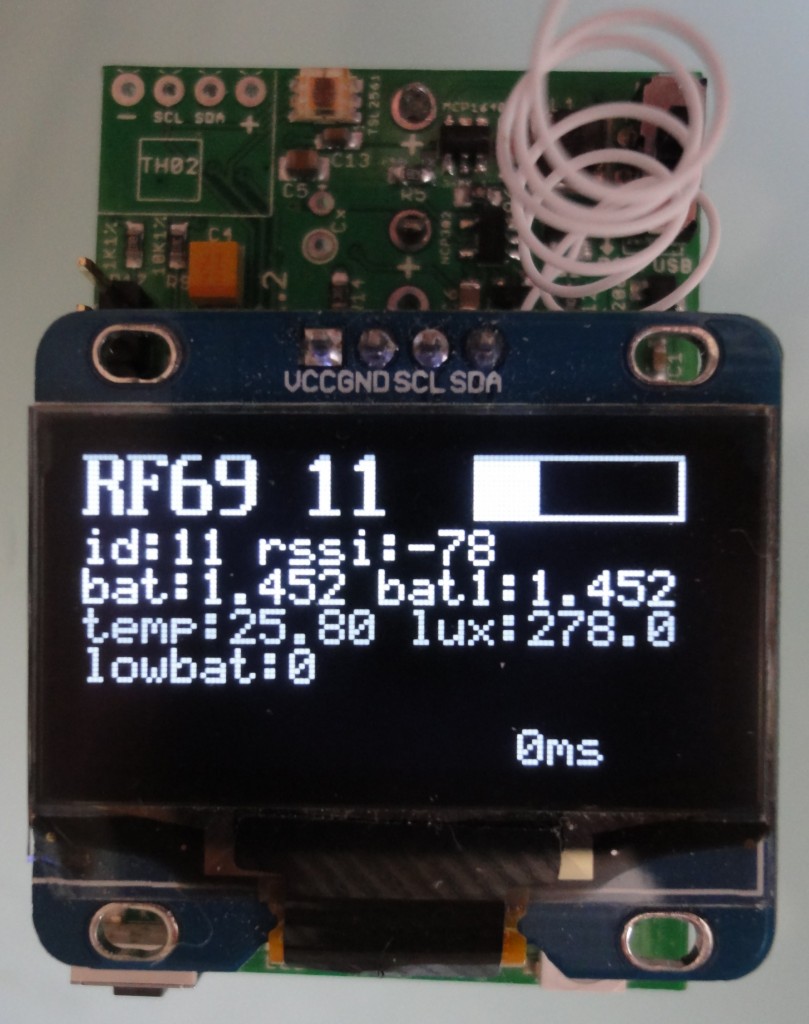 The source code for ULPNode RF protocol is available as separate code on github. It’s not a C++ library or any other executable program, just header files and a cpp file so like this, whatever Gateway you want to compile for, you just need to copy this folder on your compilation project

If your Gateway is Arduino based, you just need to put ULPNode_RF_Protocol folder into your Arduino Libraries folder as any other library.